How will Japan avoid disruptive loss in export markets

Businesses in Japan are focused more on strengthening receivables' collection activities than having a more strategic approach to credit management.

Similar to last year, in 2019, Japanese GDP is expected to expand less than 1.0%. This is mainly due to a less accommodating export markets. Domestic demand is expected to be the basis of the economic expansion.

Export growth in Japan is expected to slow down due to lower global trade expansion, less demand from China and the increased risk of protectionism. Most Japanese businesses (60%) express concern about the future trend of both the domestic and global economy. They are prepared to respond to a tightening of the financial markets with cost cuts, which would affect the workforce and business growth.

Against this background, Japanese businesses report greater pressure on keeping sales levels up, particularly on the export markets. This may explain a markedly more frequent use of trade credit in B2B transactions than in the past. Compared to last year, B2B sales made on credit by Japanese respondents increased 21% to 67.2% of the total value of B2B sales (up from 55.6% last year). Cash-based sales, in contrast, contracted to 32.8%, down from 44.4% last year. After Australia, this is the highest percentage of B2B trade on credit terms in the Asia Pacific region. 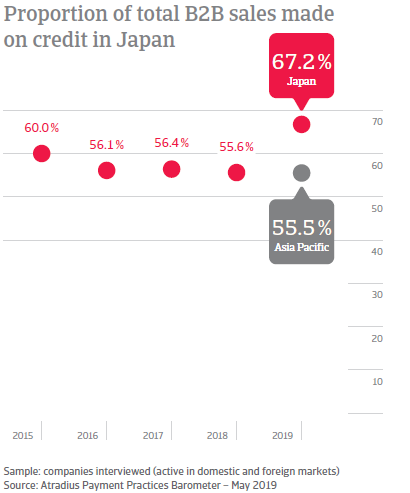 The more liberal trade credit policy observed in Japan does not appear to be supported by the extension of equally more liberal payment terms. Survey findings reveal, in contrast, that respondents in Japan request B2B customers to settle invoices on average 5 days sooner than last year, namely within an average of 41 days from the invoice date. Although shorter than last year, these are the second longest credit terms in Asia Pacific, after Taiwan (45 days), and are notably above the 32 days average for the region. However, the shorter payment terms set by Japanese respondents are indicative of a stronger perception of the customers’ payment default risk this year than last year. Because of this marked shortening of credit terms, and of slightly faster payments by customers, respondents in Japan are now able to turn past due invoices into cash on average in 46 days, nine days earlier than last year.

Despite their more liberal trade credit policy, and a heightened perception of the risk of customers’ payment default, it is surprising that 20% of Japanese respondents (twice as many as those in the region) stated they do not have a strategic approach to receivables’ management. Of those respondents who use receivables’ management tools along with more stringent credit terms, 39% focus their attention on assessing the prospective buyer’s financial profile and 34% reserve against bad debts.

An average 13.2% of the total value of B2B invoices issued by survey respondents in Japan remained unpaid at the due date. This is markedly below the 29.8% average for Asia Pacific. When questioned about the impact of customers’ late payment on their business, 58% of Japanese respondents (compared to 25% at regional level) reported no impact, while 22% (compared to 41% in the region) reported they needed to delay payment of invoices to their own suppliers. Japanese respondents appear to be far better at collecting overdue invoices. The proportion of bad debts written off as uncollectable (1.1%) remained in line with last year’s rate. This compares to a 2.1% regional average.

Respondents in Japan focused on strengthening their receivables’ collection activities 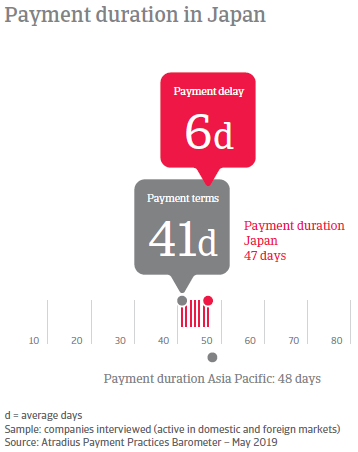 Most respondents in Japan (71% compared to 47% in Asia Pacific) do not expect payment practices of B2B customers to change over the coming months. The percentage of respondents anticipating improvement (13%) is not markedly different from that of respondents expecting deterioration (16%) in payment behaviour. To protect their business against the risk of payment default by their B2B customers, 57% of Japanese respondents will check their buyers’ creditworthiness more often and 45% will increase their bad debt reserves over the next 12 months. 41% of respondents stated that they are considering monitoring their customers’ credit risk, increasing dunning (outstanding invoice reminders) and using credit management software more often over the coming months. It is worth noting that nearly 20% of respondents are considering outsourcing invoice collections.

Overview of payment practices in Japan

Average payment terms longest in the manufacturing and machines sectors, shortest in the wholesale/retail/distribution and consumer durables sectors

Respondents in Japan from the manufacturing and the machines sectors extended the longest average payment terms to their B2B customers (averaging 46 days from the invoice date in both sectors). Respondents in the wholesale/retail/distribution and in the consumer durables sectors extended the shortest payment terms (averaging 34 days in both sectors).

The manufacturing and construction sectors in Japan are the most impacted by late payments. The value of overdue invoices in these sectors averages 18% of the total value of respondents’ B2B invoices (above the 13.2% regional average). This compares to an average of 13.0% for the wholesale/retail/distribution sector and 12.0% for the services sector. The agri-food sector recorded the lowest value of unpaid invoices (less than 10%).

Businesses need to be able to take on risk to grow and enter new markets, while at the same time protecting their trade receivables to ensure a stable cash flow.

Respondents from SMEs in Japan extended the longest and from large enterprises the shortest average payment terms to B2B customers (averaging 42 days and 38 days from the invoice date respectively).

SMEs wait the longest to turn invoices into cash 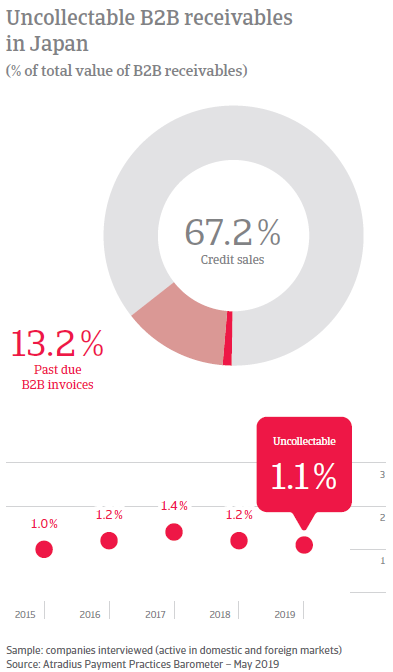 Bad debts written off at highest rate in large enterprises

Large enterprises in Japan recorded the highest proportion of B2B receivables written off as uncollectable (1.5%). The average for SMEs is 1.3% and for micro-enterprises less than 1%.

Japan´s export growth will slow down due to lower global trade expansion, but domestic demand will underpin the economic expansion of about 1% in 2019.

After nearly a decade of annual improvements, 2019 is expected to mark the first year of insolvency growth since the crisis.

The sector shows good growth rates, but manufacturers active in the US are affected by the import tariffs on steel and aluminium imposed since June 2017.