Short-term credit risk of German automotive suppliers largely depends on the duration of the semiconductor shortage and the development of raw materials prices. 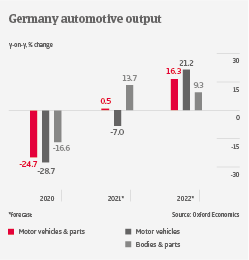 Profit margins of businesses remained stable in H1 of 2021 due to the rebound in Q1, but are expected to deteriorate in the coming months, with Tier 2 & 3 businesses mainly affected. Even suppliers that do not require semiconductors for their own manufacturing process suffer from the “stop-and-go” production by Original Equipment Manufacturers (OEMs). Most suppliers have to be prepared to deliver parts and components just in time - as soon as OEMs resume/increase their production. Therefore they have to maintain or even increase their stocks during OEM production shortcuts, which results in ongoing high fixed costs and declining revenues. At the same time, suppliers have to cope with sharply increased costs for raw materials (e.g. steel, plastics) and fuel/energy.

Tier 1 and larger Tier 2 businesses generally have high facilities and good access to capital markets. However, suppliers at the lower end of the value chain face increased gearing and higher dependency on bank loans, often with tight covenants. Payments in the industry take 60 - 90 days on average, and payment behaviour has been good over the past two years. While insolvencies decreased in 2020 and in H1 of 2021 due to a bankruptcy moratorium and government support, a major increase is expected in the coming twelve months. Mainly affected will be those Tier 2 & 3 suppliers that suffer most from the current car production interruption. A prolonged semiconductor shortage in 2022 remains the main downside risk for the insolvency development.

Due to the ongoing production delays, input price increases, the expected surge in business failures, and challenges for suppliers to cope with the shift towards e-mobility, we have recently downgraded our sector assessment from “Fair” to “Poor”.

German GDP is forecast to rebound this year, enjoying a more robust acceleration by year-end 2022. However, late payments across industries cast a cloud over this outlook.

As fiscal support is phased out, global corporate insolvencies are forecast to increase by 33% in 2022