Poland's economy: a solid 3.8% growth outlook in 2021 and rebound of some industries, while credit risk for transport, retail and services remains high

Poland's economy: a solid 3.8% growth outlook in 2021 and rebound of some industries, while credit risk for transport, retail and services remains high 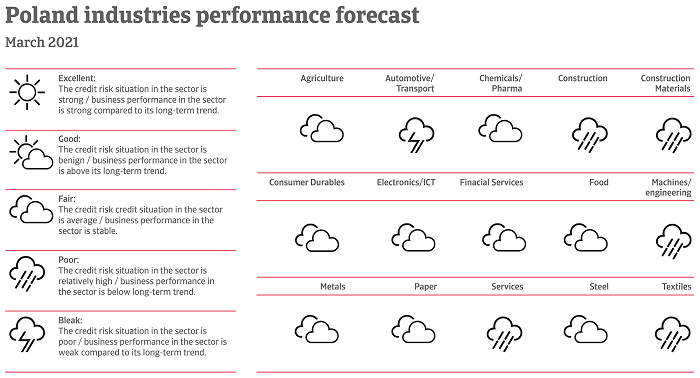 Ongoing disputes with the EU over rule of law issues

Supported by the ruling national–conservative Law and Justice (PiS) administration, incumbent Andrzej Duda won the presidential election run-off in July 2020 by 51% to 49% against the liberal candidate Rafal Trzaskowski. The narrow result reflects the political division of the country, with Duda gaining most support among elderly voters and those from the more rural eastern and southern regions, while Trzaskowski performed well among younger voters, in the larger cities and the western regions of the country.

Over the past couple of years, the PiS administration has launched some controversial policy initiatives, such as seizing direct control of the state broadcasting channels and the security services, as well as purging the heads of state-owned companies. The attempts to curb the independence of the judiciary by imposing political control over courts and the appointment of judges is a major issue. The European Commission (EC) has repeatedly warned the Polish government that such moves pose a systemic risk to the rule of law and violate EU statutes.

At the end of 2020, Poland, together with Hungary, initially threatened to block the approval of the EU´s budget and coronavirus recovery package, opposing a mechanism that made some funds conditional on a country´s adherence to certain EU rule of law stipulations. While the EU budget was finally approved in December after the EU leaders had reached a compromise, the issue of rule of law will remain contentious between Poland and the EC and the majority of member states.

Economic contraction in 2020 much lower than EU average

In 2020 Poland´s economic contraction due to the coronavirus pandemic was 2.8%, much less deep than the average recession of EU member states of 6.4%. This rather low decrease is due to the fact that Poland´s economic performance is less dependent on exports, compared to its Central European peers like the Czech Republic, Hungary or Slovakia. At the same time, private consumption accounts for 58% of GDP, reducing the vulnerability to external shocks (as evidenced by the avoidance of a recession during the 2009 credit crisis).

In 2021 the economy is forecast to rebound by 3.8%, given that the current surge of coronavirus infections can be contained and the vaccination process is rolled out in time. Private consumption is expected to increase 3.5% after decreasing by the same figure in 2020. Increased government payments to families (e.g. a child benefit programme) and pensioners, along with tax breaks, continue to sustain private consumption, while unemployment is expected to level off. Polish exports are forecast to rebound strongly by 9% after a 1.9% contraction in 2020, supported by resurging demand from the Eurozone. Industrial production and investment are expected to grow by 10.6% and 3.2% respectively this year.

Coronavirus-related stimulus measures worth about 12% of GDP

In order to support the economy, the Central Bank lowered the benchmark interest rate three times in early 2020, to a record low of 0.1% since May 2020. This accommodative stance is currently helped by lower inflation, which decreased to 2.4% in December 2020, below the Central Bank´s medium target of 2.5%. This year a 2.6% inflation rate is expected.

Measures to support businesses include credit guarantees, exemptions and deferrals on taxation and social security contributions, furlough schemes and supplementary payments. In order to sustain businesses´ liquidity in sectors that suffered most from the second wave of the pandemic, the government launched an additional stimulus package called “Financial Shield 2.0” in January 2021 to provide support mainly to SMEs active in more than 50 industries, worth EUR 2.9 billion. Poland will also largely benefit from the “Next Generation EU” fund to help countries recover from the coronavirus-induced recession and from additional EU subsidies. Together with its own funds, the Polish government plans to use EU support for accelerated public investments in infrastructure, energy and digitalisation.

Due to the comprehensive stimulus measures, the fiscal deficit increased to 8% in 2020 (from 0.8% in 2019) and is forecast to rise again in 2021, by 5% of GDP. At 54% of GDP in 2021 (47% of GDP in 2019), public debt is rising but remaining sustainable. While public debt is subject to some currency risk and vulnerable to international investor sentiment, its overall composition remains low-risk.

Upgrade of performance assessment for some industries

Since H2 of 2020, the business performance and credit risk situation in the consumer durables and metals and steel sectors has improved, leading to sector assessment upgrades from “Poor” to “Fair.” When it comes to consumer durables, sales have rebounded in the household appliances and furniture segments, and the 2021 outlook is more positive due to an expected growth in household consumption. Metals and steel recorded a demand recovery in H2 of 2020, benefiting from restocking and resumption of production by end-customers. The performance of steel processors and wholesalers delivering to automotive and household equipment has been surprisingly good, helped by higher prices.

However, for some other industries like construction, machines, services, textiles and transport, the performance assessment remains “Poor” for the time being. While construction businesses should benefit from the planned public infrastructure investments, operating margins remain very tight, with increased credit risk mainly for smaller players. In the transport segment, the credit risk in the passenger road transport and road freight transport segments remains high. In the service industry, many segments have suffered from pandemic-related lockdown measures. Those particularly suffering included hotels and catering, restaurants, bars, entertainment and cultural events, tourism, travel agencies and tour operators. Despite additional fiscal support for the industry, it is expected that up to 30% of businesses could not survive the pandemic crisis.

Due to comprehensive stimulus measures, many Polish businesses received large financial support and could sustain their cash position for the time being (see above). However, it is expected that this support will abate and finally expire over the course of 2021, as the economic rebound gains momentum. This could have an adverse effect on businesses´ liquidity and lead to rising payment delays and insolvencies, especially in those sectors mainly affected by the pandemic, such as transport, brick-and-mortar retail and services.

Despite a massive increase in overdue receivables due to the pandemic, Polish industry is largely upbeat about the outlook for 2021.

As several vaccines have been approved and are being rolled out, we expect the global economy to rebound in 2021