Many South Korean Tier 1 suppliers are already preparing for the transition towards e-mobility, but this transition will prove to be more difficult for Tier 2 & 3 businesses.

After contracting 11.7% in 2020, South Korean automotive output is forecast to rebound by about 5% in 2021 and 2.5% 2022. New car sales increased year-on-year in H1 of 2021 in the domestic market and abroad, but have started to decrease since then, as semiconductor shortages have caused supply and production disruptions. Lower output by large South Korean Original Equipment Manufacturers (OEMs) has a ripple effect along the value chain. While the profit margins of OEMs have remain stable so far, those of suppliers have started to deteriorate. At the same time, the financial situation of some Tier 2 & 3 suppliers is more strained due to larger borrowing. 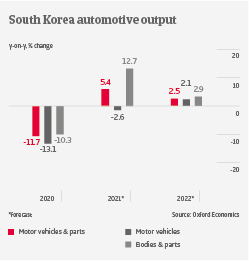 Many Tier 1 suppliers are already preparing for the transition towards e-mobility, expanding related facilities. However, this transition will prove to be more difficult for Tier 2 & 3 businesses, which often lack the necessary financial strength and technological skills. While the South Korean government has not yet launched a support scheme for suppliers, it plans to spend USD 10.3 billion in 2022 for e-mobility, including incentives for hydrogen and battery-electric vehicles and charging stations.

Payments in the automotive industry take about 60 days on average. Both payment delays and insolvencies are expected to increase in 2020, mainly affecting those smaller suppliers that already face financial difficulties (e.g. due to high leverage) and suffer most from production cuts, sales decrease, deteriorating margins and extended credit terms. Currently it is expected that business failures will increase by about 20% in the coming twelve months, but the rise could be even higher if the current supply issues last in H1 of 2022.

Asian trade is at a crossroads in the wake of the Covid-19 pandemic and with the US-China trade war ongoing.

Asia: half of all credit sales overdue during pandemic

One year into the pandemic, businesses polled in Asia told us they experienced serious setbacks to growth and needed to take several measures to face the changed economic and trade circumstances.